This is a quick post before it gets too late in the week. I did make the Apple Brown Betty even though the temperature was still in the high 80s. Okay I use my oven anyway even in 80 degree weather. I grill all year long too. The recipe had you make your own bread crumbs, and toasts them slightly. I found some good Gala apples. It went very smoothly, for which I was glad because after work I just don't feel like baking much.

Because we have a small family that doesn't eat much desserts I cut the recipe down. I used 4 (or 5 apples I can't remember), squeezed some lemon juice on the slices. 1/4 cup brown sugar (I still only had the dark). I did add a little more cinnamon than it called for and I added some ginger and a little crystallized ginger since I just picked up some more at the Asian market over the weekend. I am also on a ginger kick lately. (maybe it's a Fall thing)

It's a little different with the bread crumbs, I like the oats, butter and brown sugar topping better. This was nice though because the sweetness was just right, not too sweet at all. 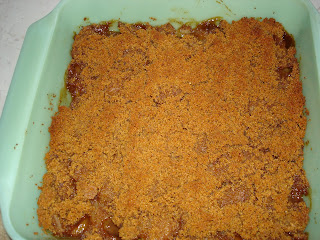 I just wish my photos were as nice as some of you out there. I'm just not used to not having a good camera that I can control and won't take close ups very well. 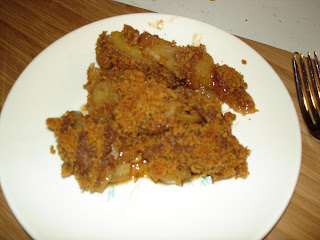 It made the house smell wonderful! I took a photo before the meatloaf was out of the oven and the ice cream was out in the freezer. Oh well we ate it with ice cream.