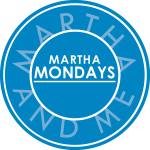 I'm happy that Pru chose this cake because I love molasses and ginger, and I don't make too many desserts. So this gave me a good excuse. The recipe is found in the October issue of Martha Stewart Living magazine. First off I think Martha Stewart's recipes could be simplified a little. I mean do we really need to dirty 3 different bowls? One for the flour, dry mix, then egg, molasses, sour cream, and a third for butter sugar! I would of used a bigger bowl than she said for the eggs and not such a big one for the flour. Oh well, we'll do it like Martha does, only can she send her staff over to clean up! Did I mention she had 4 eggs in it?

I had all the ingredients and didn't have to go out a buy anything. I even had the mace which I was waiting for a recipe to use it in. I had bought it the last time I was in a Penzey's Spices. The thing that really surprised me was the fact it had 2 sticks of butter in it. It also called for 3 T grated fresh ginger, that seemed like a lot of ginger (and I like ginger) I used a good chunk of my ginger and added a little dry ginger (which I grind to a powder myself). I think crystallized ginger would of tasted good in this too. Okay enough ginger talk. 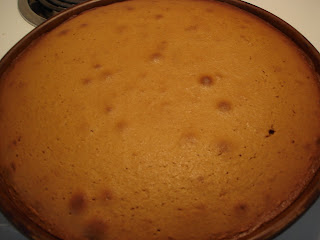 The cake baked in the amount of it said it should. I have a stoneware round baker that is 11" maybe a little large for this recipe, but it still tasted good. It had great flavor, but it was a little dense, or dry. It called for cream cheese frosting, which I'm not a fan of so I didn't make it. It is usually too sweet. I can't handle too sweet desserts, plus all that butter, so I just did the glaze. The brown sugar glaze (I only had dark brown sugar and it called for light brown, but I like that molasses taste) was fine drizzled over it, served with whipped cream. 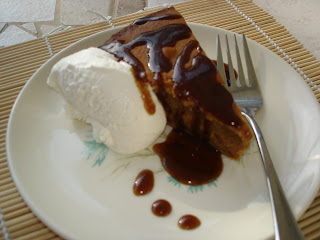 Posted by tinyskillet at 5:34 PM