We've had a couple of weird/busy days. We had Monday off from school due to MLK day and today is teacher's work day. I could of gone into work to...file or something, but I have so many personal sick days that I never use days like this is perfect, and they don't have to get a sub for me. Saturday Maranda and I had to go to a funeral, the principal and founder of her school passed after a long fight with cancer. It was standing room only, she was such a good influence and had many beloved friends and family.

Yesterday we had to deal with this stray dog that wouldn't go home. She was the sweetest dog, and just hung out. Our neighbor across the street that knows everyone and everything that goes on in the neighborhood didn't know this dog. We took her for a walk hoping someone would recognise her. We took her to our Vet to scan her to see if she had a chip. She had a collar, but no tags. Our neighbor behind us, tied her up in their yard because they had more traffic going by the house hoping the owners were looking for her. 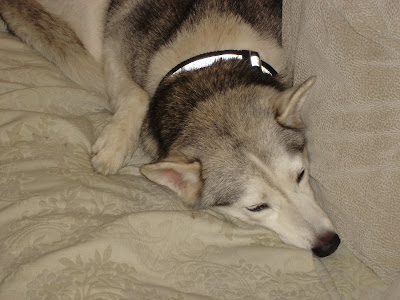 She has one blue eye and one brown eye. She got along fine with Tucker, and made herself at home. When she was at the neighbors house we felt we could finally do something... 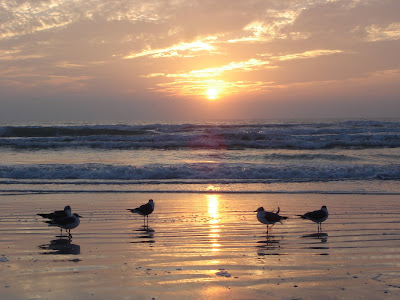 So we went to see sunset and the beach. The wind was coming out of the north, that always brings on a chill. So when we got home I had some salmon to fix. I was planing on doing it a different way, but due to the time I just did it Maranda's favorite way. 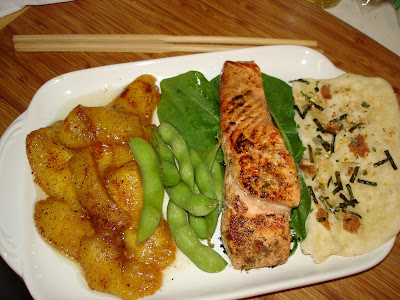 I used Goya's Mojo Marinade, it's citrus based goes well with fish, and she always would eat it that way so I used it quite often. I did add a little dill and tarragon, pan fried in a little oil and butter. A nice finishing salt on top of the fish and the edamame. The Olga's bread I made earlier with furikake. Store bought too, I'm going to make my own next time and just use the jar it came in.
Now the plantains were a Hawaiian Plantain that I have never tried before. I let it ripen and was planning to do it the way we do regular plantains. They were so sweet and soft I could of just eaten them plain, but I decided to go with the sweetness. I added cinnamon and a little gingerbread liqueur. I would make a great dessert. 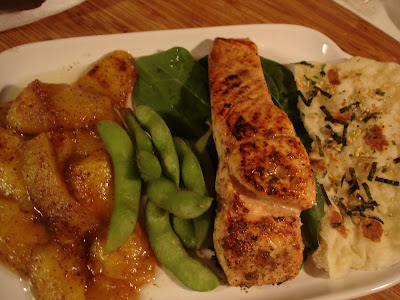 So to finish the story about Sasha, the stray. I called the Humane Society this morning to report a found dog, they said I had to call Animal Services. When I called Animal Services they said I had to call this other number which I could get through to because their phones were not working. So I went to the H.S. in person to get her scanned (our vet could only pick up one kind of chip). She had no chip. Still couldn't reach A.S. so I drove all the way past 75 quite far out of my way to talk in person. When I showed up they said that the H.S. called and had the owner's number and did check for it when I was there. Sheesh!!! So I called and they couldn't get her until after work. So Wade wasted his day off yesterday and I wasted my day off today with this dog. When he picked her up he said "I guess I should put a tag with our number on it". Yes that would help!!! When Wade was walking her around last night someone said "Oh you found your dog?" "No" he said "I am looking for the owner." Apparently she was out last week at her house. Anyway we are so happy we found her home, and we are keeping their number for when we see her again!
I am so happy that I have a place to just vent. You all have been so nice to let me do that (those of you who are still with me). And that was a shortened version! Tonight I'm just doing pasta! Have a good evening.

Posted by tinyskillet at 7:28 PM