It's been a little while since I've posted, sorry about that. I am back to work in the school's clinic and we already had a broken arm and a 911 call the third day of school. She was a kindergartner that slipped on the bars on the playground. It's taking me awhile to get used to the routine again and I know you all feel so bad for me...hehehe! 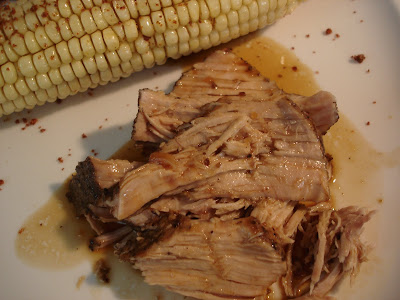 One of my favorite meals as a child was my mom's pork roast. She would make it in a cast iron dutch oven, then she would add the little white potatoes, and serve it with corn. The juice poured over it all was so comforting. I was not one who really like potatoes or gravy, but the little white potatoes would turn golden brown by the time they were done.
My mom would let us choose what we wanted for dinner on our birthday and this one was my choice several times. She would make it for me even though it was August and she never liked the oven on that long in the middle of summer! She's the best!
Out of habit of what I'm used to I usually roast my sirloin pork roast in my cast iron dutch oven. I didn't have those little white potatoes, so I just use some russet potatoes, and corn on the cob, but I roasted the corn and it cooked too long, next time I'll stick to grilling or steaming it. The potatoes and corn are my mom's touch not necessarily Caribbean. I don't like fruit with my savory so I didn't do that, tropical fruit would definitely be a Caribbean touch! 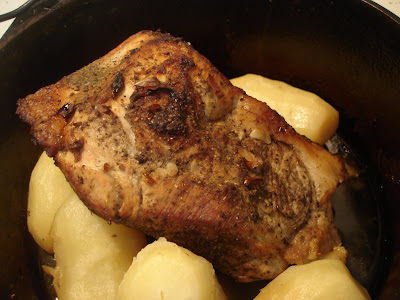 I don't usually use a recipe much when I make roasts, but I had to give you one here. So I found this in in Country Living, I changed a few things, but it was my inspiration!
Ingredients:
2 to 2 1/2-pound Pork Sirloin Roast
1/4 cup dark brown sugar (or less)
2 tablespoons minced fresh ginger (less if you use powder)
1 tablespoon minced garlic
1 1/4 teaspoon fresh-ground black pepper
1/4 teaspoon ground allspice
1/4 teaspoon ground cloves
1-1/2 teaspoons ground cumin
1-1/2 teaspoons red pepper sauce
2 (about 1/2 teaspoon) bay leaves, finely crumbled
1/2 cup light rum (you can use orange juice if you want to omit the rum)
1/4 cup lime juice
1 (2-pound )Pork Top Sirloin Roast
1 teaspoon sea salt
1 small onion, cut into 1/2-inch slices

Method:
1.Combine brown sugar, ginger, garlic, 3/4 teaspoon pepper, allspice, cloves, bay leaves, cumin, red pepper sauce, rum, and lime juice in resealable plastic food storage bag. Add the pork roast, and marinate in refrigerator for at least 4 hours or overnight, until it is thoroughly marinated.
2.Preheat oven to 450 degrees F. Remove roast from the marinade, pat dry, and sprinkle with the salt and remaining pepper[I used a cast iron dutch oven and just browned it first on stove top]. Reserve the marinating liquid. Place the onion slices on the bottom of a roasting pan and put the pork roast on top. Roast in the oven for 15 minutes. Reduce oven temperature to 325°F
3.Roast uncovered (I covered mine) 1 hour 45 minutes to 2 hours or until thermometer reads 155°F. Remove pork from pan. Cover and let stand 15 to 20 minutes or until thermometer reads 160°F .

If you want to use the remaining marinade to make a sauce heat it up in the pan scraping the roast and onion bits left on the pan, and add some broth if you like. 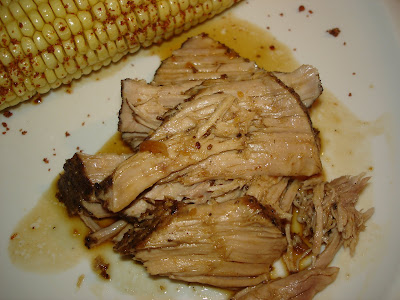 Yummy! The pork is great when made into shredded pork sandwiches too. I love the leftovers.

Posted by tinyskillet at 5:53 PM