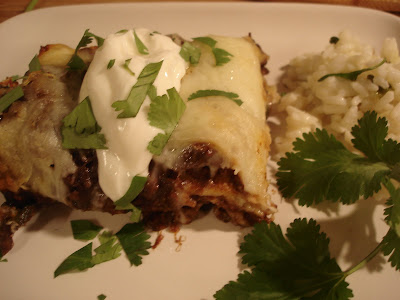 I first discovered Kathleen and her blog Cooking in Mexico when she posted a comment on Steamy Kitchen . From her comment I had to check out her blog, and I love Mexican food so it was a win win for me. Kathleen is a delight and I love her blog with all the fantastic photos and her recipes are definitely worth checking out. When I first arrive on her blog this was the recipe I saw and just knew I had to make it. Living in southwest Florida we have easy access to Mexican and Latin foods. I used Mexican crema in the recipe instead of sour cream...I picked it up at Walmart, it was that easy to find. You can use sour cream, but I had this in hand so I wanted to use it up. 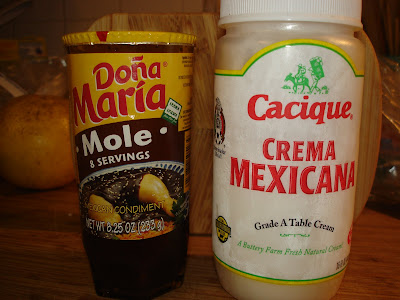 We can also get several brands of jarred Mole (pronounced with an accent on the first syllable: MO-leh)sauce, but she suggested this one Dona Maria. You can find this in the Latin section of your market, or I found it at Sav-a-Lot, they have a couple of aisles of Hispanic and Latin foods... I love it. I think next time I will check our Mexican Market to see if they have fresh made mole!
While I was doing some research on the recipe before I made it I ran across Hispanic Kitchen and a few others that all seemed to stem back to the book Like Water for Chocolate...where this recipe was from. Apparently this is a little known recipe, it is like a Mexican lasagna without the red sauce. Thanks to Kathleen's recipe I have discovered this new (to me) flavorful one dish meal. So like always... I made it the way I thought my family would like it, but stuck pretty close to the recipe. I skipped the dried fruit, I didn't think my daughter would like it.

1 lb. ground pork
7 oz. walnuts, chopped in small pieces (not ground)
7 oz. almonds, chopped in small pieces (not ground)
2 shallots, chopped
2 tomatoes, chopped
1 cup beef broth
1/4 cup molé
8 oz. queso fresco (or manchego or Monterey jack cheese), grated or thinly sliced
2 tsp cumin (more if you like)
1/2 tsp salt and pepper to taste
1-2 tablespoon orange juice
1 cup fresh spinach leaves (OK I strayed here, but I had some on hand and like to sneak some veggies in when I can)
1 lb. tortillas about 9
1/2 cup Mexican crema (or sour cream thinned with milk)
Oil
Preheat oven to 350 degrees.

In a large skillet heat some oil and sauté shallots, and cook the meat and sprinkle with salt, pepper and cumin. Once pork is browned, add broth, molé,tomatoes and nuts and squeeze the juice of the orange on top (add more or less to taste). Add more salt and cumin if you like. 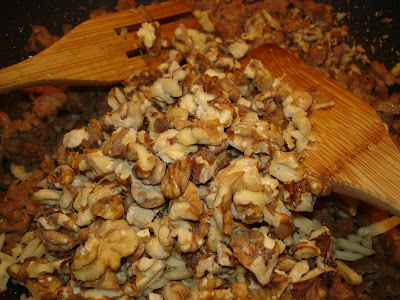 I left the nuts a little large kind of a rough chop...which was nice for Maranda since she ended up picking them out. The almonds were slivered, because that's what I had. 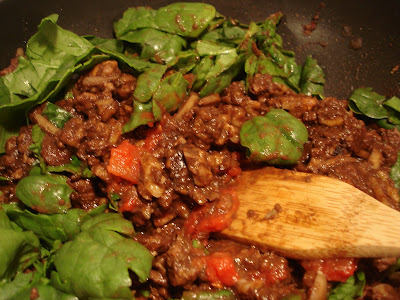 That's why I added the spinach (I had it on hand), and you couldn't even tell I snuck it in there. I added some cilantro too, I thought it might brighten it up.

Add tomatoes, nuts, mole, cumin and beef stock.
Stir and simmer 10 minutes over medium heat, add more broth or water if it gets too dry or thick.

Meanwhile, heat tortillas in a little oil in a non-stick pan. 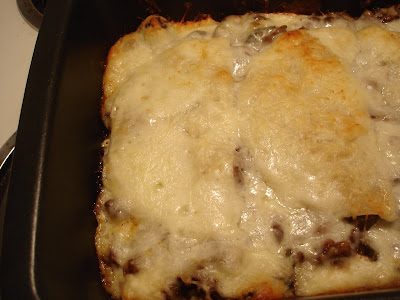 Cover with foil and bake for 30 minutes, remove foil and finish baking until it is bubbly and the cheese is a little golden or the way you like it. 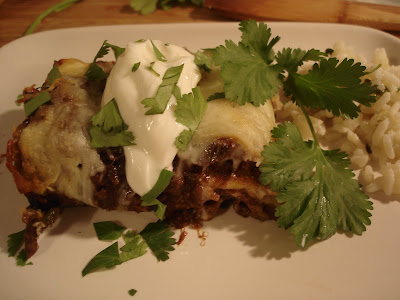 Top with sour cream and garnish with some chopped parsley or cilantro... 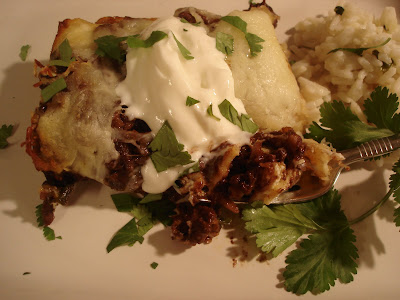 ...or you could top with some more mole. (I really don't like chopping cilantro) just saying... 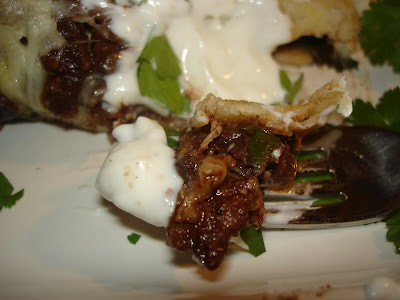 I enjoyed this dish, it was so different, and if you know me... you know that's why I had to make it. I like the mole, it really gave it a nice depth to this hearty dish. Of course with the cream and cheese....yum! I think when I make it again I will skip the almonds and use just 8 oz. of the walnuts, and make sure they are toasted first. 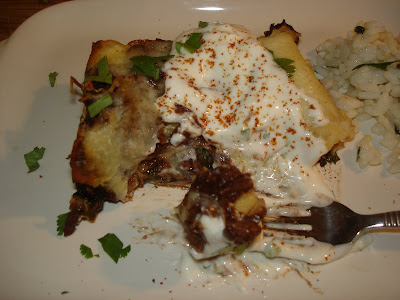 I sprinkled mine with a little chipotle powder on top...just to add to my chipotle kick lately! Wade liked it, you know he doesn't like things too hot and spicy. Maranda ate it all...except the nuts she picked out, and of course topped with sour cream her favorite topping. I froze the leftovers, just like I do with lasagna.

Posted by tinyskillet at 9:37 AM