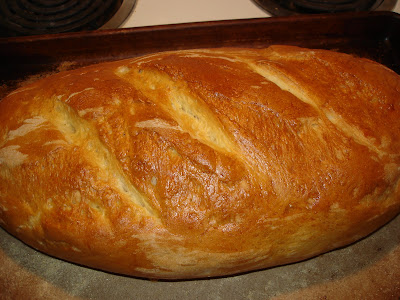 Okay you know how I feel about baking, it's a lot of trial and error, and sometimes things turn out right. Since it was spring break and we had a week to play around with food, and try new things. I asked Maranda what cuisine I should try next. She chose French, and wanted French bread. I also will post another later on that is a little more French than just French bread. Of course I made the dough in the bread machine.

4 cups flour
1 tablespoon brown sugar
1 1/3 cup warm water
1 1/2 teaspoon salt
1 1/2 teaspoon olive oil
2 teaspoons yeast
Add ingredients the order the bread machine instructs you to do. Mine has you add the liquids first and end up with the yeast in a little well made in the flour. Set the bread machine in dough cycle. Remove the dough on a floured surface and form into two loaves. (I made one loaf, so it is bigger than baguettes would be) Let rise for 40 minutes in a warm place. On your stoneware or baking pan toss down some corn meal and carefully place the loaves on pan. Brush with egg wash (1 egg and 1 tablespoon water) slice down the center for baguette or several slits diagonally across for a loaf. Bake at 375F 30-35 minutes. 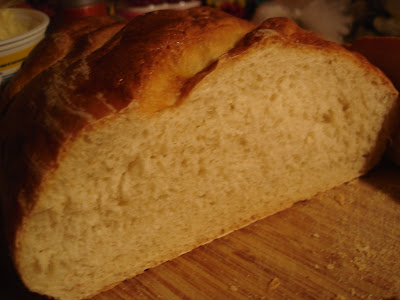 Guess what? It turned out! Wahoo! It was like what they call a crusty bread, the outside was nice and crisp and crusty and soft and tender inside. It was a nice size for sandwiches and to toast it you had to turn it around halfway through. 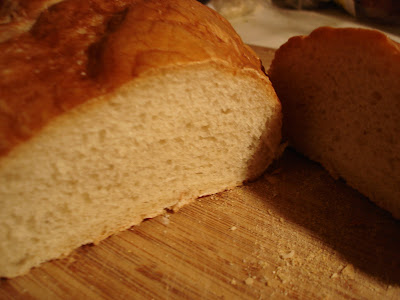 It worked great for us! I made this again since and formed two loaves instead of one. Next I'll form longer thinner baguette style, this is great. I let the loaves rise right on the the stoneware bar pan and then popped it right in the oven so I didn't have to transfer it after it had the last raise. Make some in time for the weekend!

Posted by tinyskillet at 7:47 PM