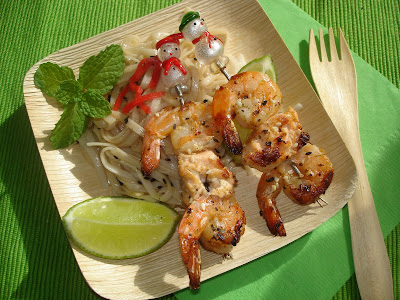 Okay a lot has been going on, as with all of you too I'm sure. I just don't handle it as well as you all do. Some fun things...a new teacher (this year) at our school co-owns the magazine Edible Sarasota, and they were throwing a launch party for Edible Sarasota Cook's, all the staff at our school was invited to this closed event for only 250 guests. It was held outside, in front of Whole Foods where they closed off that part of the street. The booths were offered to everyone who advertised in the magazine. It was fun to mingle with co-worker and some foodies in Sarasota. I just wish I could meet Jaden Hair, from Steamy Kitchen, and some new blogger twitter friends The Three Kitcheneers.

There was plenty of good food, from ahi tuna nachos, truffle oil, chocolate truffles, to pesto penne, brisket sliders, vegan brisket, and the best clam chowder! I was too busy trying and tasting everything to get many photos. Now I know what I have to work on before I go to any big food event! I will post the nachos, my favorite later. We all received a gift bag... 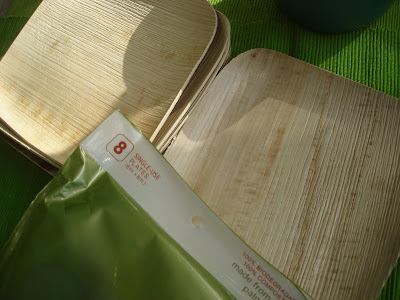 these plates were in our gift bag from a company called VerTerra, the plates are made from fallen palm leaves. They come in an assortment of sizes, and at the event that many booth used them to serve their food on, (I wasn't thinking, I should of saved some of those, now I really need to buy some more, I love them). In our gift bag we were given 8 appetizer size. So I had to try them out! Using my new hand crafted glass snowman appetizer skewers, Gulf shrimp and salmon...I made some tapas! 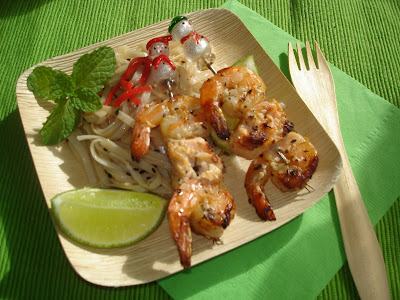 Whisk together the ingredients in a non-metallic bowl, except shrimp, salmon, and sesame seeds. Clean and devein the shrimp, and cut the salmon into bite size pieces, you can remove the skin if you like. Add the seafood to the marinade, cover and let marinate for 25-30 minutes in refrigerator.

Thread the shrimp and salmon onto the skewers, if you are using wooden skewers be sure to soak them when the fish are marinating so they won't burn. Sprinkle with salt pepper and sesame seeds.

Grill, broil or use a grill pan, cook for 3 - 6 minutes until done. You can garnish with cilantro and lime or mint. Serve with a dipping sauce, but they were actually good just as they are. 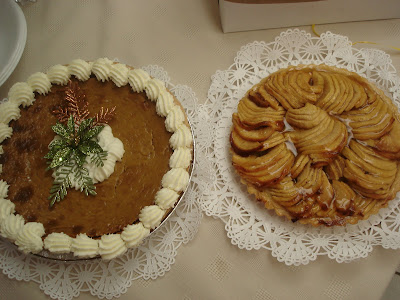 This year for Thanksgiving, I went to my aunt and uncle's, I usually make the pies and a vegetable to bring. One of the students I take care of at school, her mother owns a French bakery, and my daughter and I usually visit there on Saturday mornings or Wednesday evenings when my husband participates in a 5K run held by Mr Beery's a couple of doors down from the bakery. Just look at the beautiful pie that she gave me the night before Thanksgiving...such a good thing to go there at closing time...and knowing the owners! 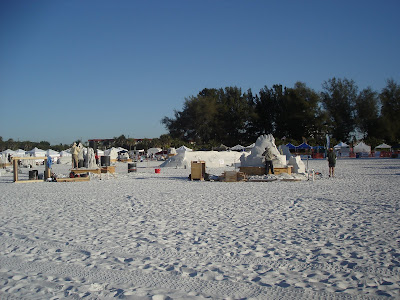 Of course I had to sneak some beach photos in my post. A few weeks ago they held the second annual Masters Sand sculptor completion at Siesta Beach. I was there early...before the crowds, but got to watch some of the artist at work. 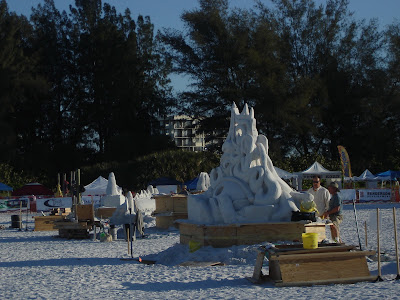 The fine, white, quartz sand is perfect for this kind of thing. They gather piles of the sand in front loaders for each team. After them completion on Monday they let them stand until 5:00 they bulldoze them down. It seems such a shame, almost as bad as when they wash down the streets and sidewalks after the chalk art fair the week before. I guess it disposable art at it's finest! 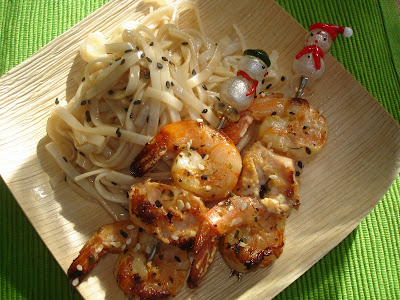 Oh I made sesame noodles to go with the seafood skewers...Maranda gobbled them up!
More tapas to come....I received some beautiful salt plates too!
See you soon!

Posted by tinyskillet at 6:39 AM