I've always loved rhubarb, I think it's the tartness of it. My mom would make pie or just cook it up and serve with dinner. My dad wasn't too fond of it, so my mom would add strawberries for him. I think my grandma used to do that too. I never like strawberries with rhubarb, it took away from the rhubarb flavor, which is what I liked.
Rhubarb was one of the first things that would come up in our garden, well actually it was our neighbor Sam's that lived behind us. We had a garden, but it was half the size of his. He would string tin pans across to keep the birds out, and we had to listen to that all summer. But he would always share his rhubarb with us.

Living in Florida it's hard to get fresh rhubarb, and I haven't worked with the frozen yet. Last week Maranda and I went to Kohl's which is new to Sarasota as of last year, but it's across town. Right next door they have this place called The Fresh Market. Oh I love that store, I told Maranda I could live there it was so nice. Too bad it's so far, or maybe not for my wallet's sake. Anyway I bought some fresh rhubarb.

A couple of weeks ago I participated in Martha Mondays when we made roasted chicken with plums. The chicken tasted great, but I didn't care for the plums, and I said (to myself) they would be be better in a crisp. I didn't have enough rhubarb alone and I had some plums on hand so that's how I combined the two they compliment each other very well. The plum doesn't take away from the rhubarb flavor at all.

Now comes the hard part actually writing it all down.

Preheat oven to 350° To prepare the filling, put the first six ingredients in a sauce pan and heat to a boil and simmer for about 2-3 minutes, until the fruit softens. Transfer to a 8x8 baking dish, at that time I added the crystallized ginger, then dotted with the butter.

In a bowl combine the the dry ingredients for the topping, then add the melted butter. Stir until well mixed, and spread over the fruit. Bake for 30-40 minutes until the crisp is golden brown. 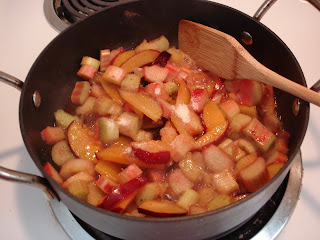 I think you could probably skip this step if you baked it long enough, but I wanted to make sure the fruit was soft enough and it thickened. 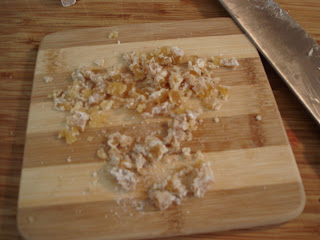 I find it easier to chop the ginger if you add some sugar to it so it won't stick to your knife. I thought next time I would add fresh ginger because I couldn't taste it that much. Then I had some of the crisp cold this morning and the ginger flavor came through more, so I'll leave it as is.
Except I wish I had made some ice cream to go with it! 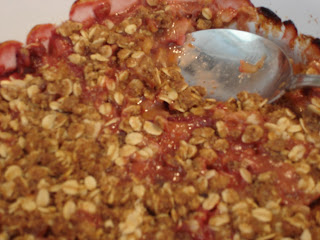 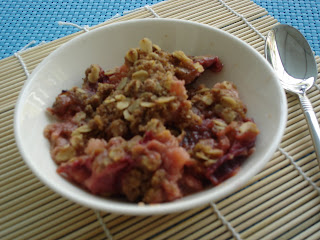 Sorry for such lousy photos. I don't know what going on with my camera. I know, it's all the camera's fault. Thanks for checking it out, I enjoyed it hot or cold.

Posted by tinyskillet at 9:08 AM