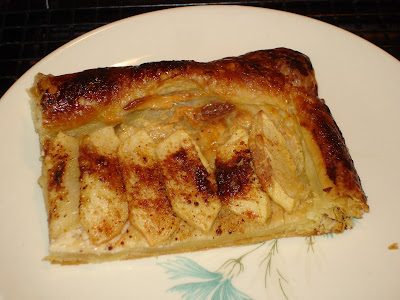 It was my turn to choose the project for Martha Mondays. I chose the apple tart made with puff pastry. I like using puff pastry like this to make pizzas. It's the same idea, but you put the sauce or pesto/ricotta cheese down then sliced tomatoes, and anything you like on pizza topped with cheese!

Okay back to the tart. Well I cheated. I checked out Pru's post before I made mine. She stated that it was a little dry and lacked something. Well I didn't have any "good" apple sauce that the recipe called for so I thought I'd try using the apricot preserves and cream cheese on instead. So half of the tart I mixed softened cream cheese mixed with warmed apricot preserves, and just the preserves on the other half. 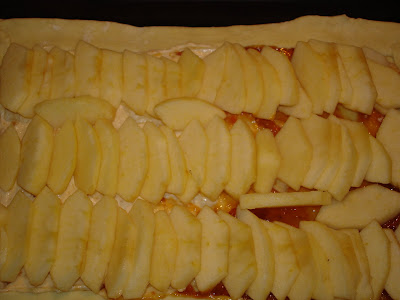 Topped with the sliced Gala apples (that's what I had on hand) in Florida we can't be too picky about our apples! Then I had to add cinnamon and some of the mace I had that I want to use more often. I put the butter and sugar on top. I think next time I wouldn't add the egg wash on the pastry because it seemed to get pretty dark. It doesn't do that when I use it to make the pizzas. The directions were to roll out the pastry and cut 1 inch strip to add the the edges with egg wash . Poke with a fork in the bottom where you don't want it to puff, refrigerate. I added the preserves and cream cheese, sliced apples topped with butter, cinnamon, and mace. Brush egg wash over the pastry, then sugar was sprinkled over the whole thing. Put in a 400 degree oven until puffs up about 20 min. Turn down to 350 degrees and finish another 15-20 min. or so. Transfer to a wire rack to cook. Sprinkle with powdered sugar if you want. 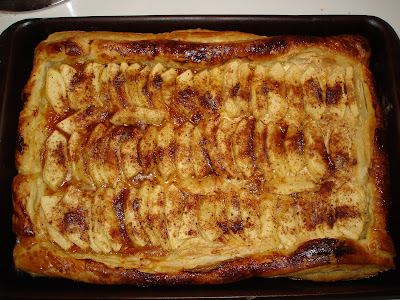 I posted before I got a picture of the cut piece. I think it tasted good with the cream cheese/apricot preserves combo. It could of used a little more sugar, maybe the preserve side only won't, I tried the cream cheese side it was so good that way! It definitely needed the added flavor the jam and Cinnamon gave it. It came out of the pan easily in one piece I just used my hands (gotta love that stoneware). I really enjoyed it, but I don't like desserts that are so sweet! It would be great cold for breakfast.

Make sure you check out some of the others that join in MMs. Pru and
Brette if you want to join in the fun check out Brette's Martha and me blog here. Others still have time to post their results. Here are some other members Megan Sassy Teresa .

Posted by tinyskillet at 7:21 PM