A Favorite on Friday

A quick post here to start my Spring Break. My sister and niece were here for a visit and the weather was fine for them. One rainy day we went to Mote Marine, my uncle is a supporter and had some tickets that we could all use. I'll have those photos on my other blog later.

I still had to work today, the staff had to work, but the kids had off. Maranda had half day, since she's at a private school and gets to start after Labor Day. I think all the kids and staff really need this right now, what a crazy week it's been.
Anyway, with family here I haven't been posting much or cooking, so I'll post about some restaurants that we've been too. This one is The Waterfrontoo in Nokomis Florida. Our friend runs it, and Wade does some high performance work on his jet skis. Eric is a pro jet ski racer and they have been to Thailand twice together for the Kings Cup which is an invitational race. Wade has been to the world finals several times with Eric and others in the past, in Lake Havasu Arizona.

On to Eric's restaurant, his parents own The Waterfront Restaurant in Sarasota. Wade and I have gone there for years, they cook steaks over charcoal flames right behind the bar. We would go there before they're were really any good steak place in town.
Here is one of our favorite appetizers, Saganaki Greek flaming cheese. The cheese is melted in a small frying-pan until it is bubbling, and generally served with lemon juice and pepper. It is eaten with bread. 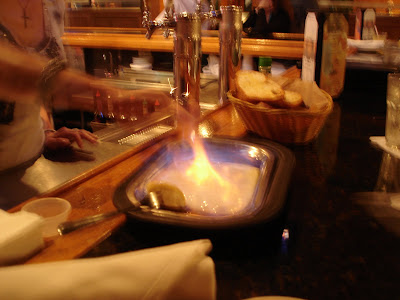 Brandy is poured over it and lit. 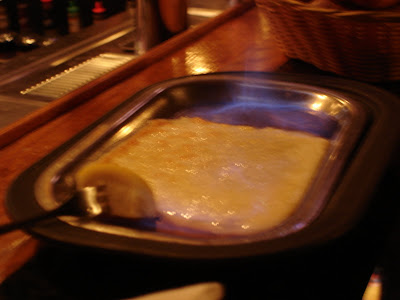 OPA!
The lemon was squeezed over it, it put out the flames. 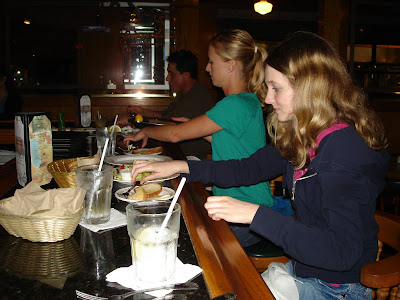 It was served with a nice garlic bread. We usually sit at the bar to eat, just to chat with everyone and they all know our name. It's a nice casual Friday night supper. 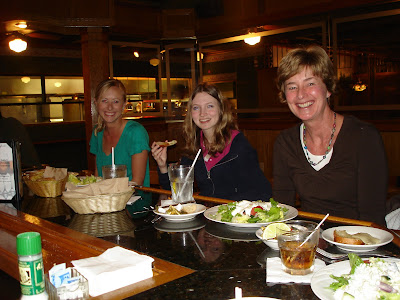 Coconut shrimp for them. Wade and I had sesame seared tuna, and I didn't get a photo of either. I guess I was too busy enjoying family and friends. 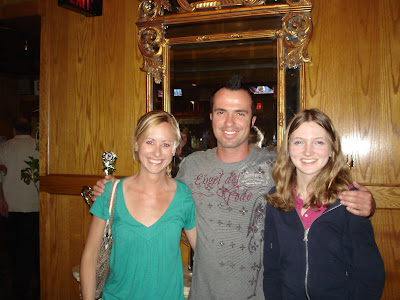 Eric and the girls, in front of where he displays his Jet skiing awards and trophies. 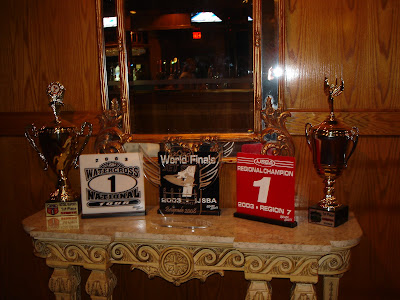 I think this is only some of his trophies. If you want to see him in action check here .
It's going to be a good Friday night, I just answered the door and a beautiful package of chocolates from England arrived! Thank you Pru! I will show you all later after I try them and let you know what I think!

Posted by tinyskillet at 3:26 PM