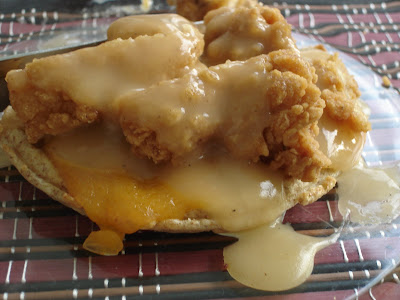 Chicken and waffles is a southern dish that is often served at breakfast, but is so good for a quick summer supper. Of course if I had a waffle maker I'd make my own, and I usually don't fry chicken unless it's pan fried, which would be good to make your gravy with this, but life gets in the way and I took the easy way out. I got this idea from Publix our local grocery store. Aprons Simple Meals has the recipes card available at the stores or you can go on line. It gives you many quick, and easy meal ideas for us busy moms, and dads. They have the shopping list prepared and a lot of other good information to check out. This one is too easy and I feel a little guilty even posting it, but it was a big hit with my daughter. She wanted to make it again, but this time I used baked chicken instead of fried.

Broil* waffles 30 seconds on each side to lightly toast. Place cheese on waffles; top with chicken.
Spoon 2 tablespoons gravy over chicken. Broil 1–2 minutes or until cheese melts and chicken is hot.
Sprinkle with parsley and 1/2 teaspoon pepper sauce. Serve.

*Since I use my stoneware I baked it instead of broiled. I just toasted the waffles first the put the cheese chicken and gravy and popped it back in the oven until warmed. We had it on whole grain waffles and it was served with sriracha sauce. I sprinkled with chipotle chili pepper powder. A friend suggested that I try that on popcorn with a little butter, so I also used the chipotle chili powder on the corn on the cob...it was so good that way! You gotta try it! 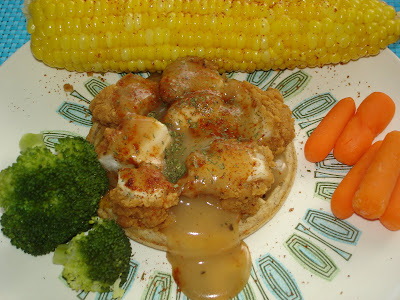 There is another version of chicken and waffles Pennsylvania Dutch recipes that use baked shredded chicken, and a few other ingredients. We're making that one next! Have fun!

Posted by tinyskillet at 9:39 AM