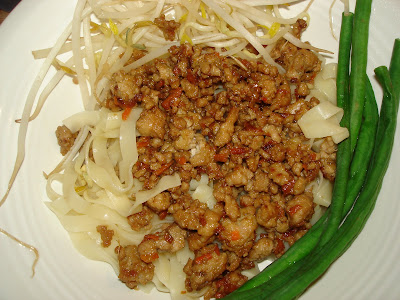 I'm sure this has happened to you. I was planning on making some dumplings and had my minced pork already mixed in with some goodness ready to go. Well...I found out my gyoza wrappers were not ready to use, they were still in the freezer. So change of plans...

I have been wanting to make Ants Climbing up a Tree but I didn't have the bean thread noodles yet to make it, but thought I could use different noodles. I don't usually get ground meats until the day that I am going to use it, I don't like it hanging around too long uncooked. I needed to use it up, so...I had to improvise. 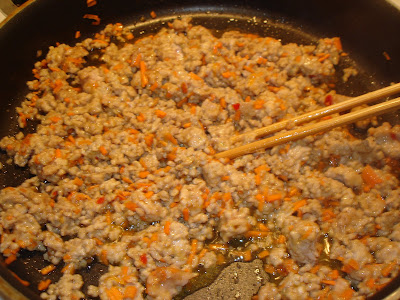 The meat was already mixed with shallots, carrots, lemongrass, ginger, and toasted sesame oil, I just dumped it into my wok pan and browned it. A few things were in there that I probably would not of added if doing it the proper way. This is what I ended up with.
1 1b ground pork
1 tablespoon of peanut oil (I used sesame oil)
2 shallots diced
1 carrot small diced
1 tablespoon lemongrass (optional)
1 tsp garlic ginger sauce (optional)
2 tsp fresh minced gingeroot (optional)
1 tablespoon light soy sauce
pinch of salt
1 tablespoon garlic chili sauce ( I didn't have chili bean paste)
1 tsp dark soy sauce
1 tablespoon oyster sauce
3/4 cups chicken stock
I used Vietnamese noodles (I let Maranda choose)
Top with finely chopped scallions (optional) I used bean sprouts because I was going to use them in the dumplings.
Combine the meat light soy, salt, sesame oil, ginger, carrot, shallots, lemongrass, and ginger garlic paste ( I think I used some sesame paste too). In a preheated wok or deep pan cook the meat mixture until brown. Add the chili garlic sauce, oyster sauce and stir rapidly, stir in the dark soy sauce.
Pour in the broth, noodles*, and you can add a little more light soy sauce at this time. Cover and simmer 8-10 minutes, shake the pan but do not stir, toss with scallions right before serving.
If you are not using glass noodles, just pour in the broth and simmer then serve over cooked noodles. I put them in individual bowls. I hope this make sense! 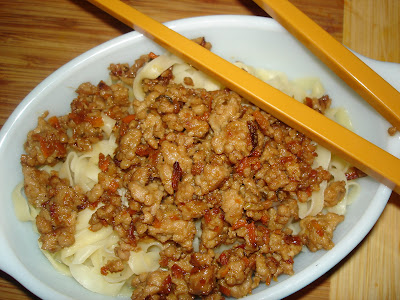 Maranda's dish without anything added on top! The carrots and shallots became a little caramelized and were very flavorful! 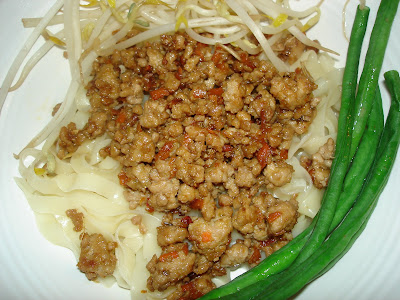 I had some long beans and blanched the sprouts to add to ours. It was tasty, and full of flavor! I guess this is a hodgepodge ants climbing up a tree...or my version!

Posted by tinyskillet at 3:37 PM