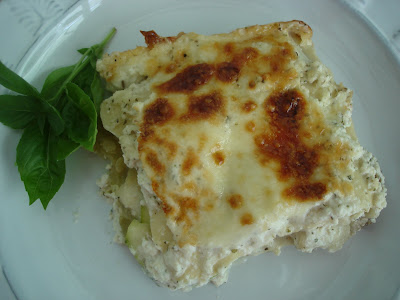 This week was my choice for Martha Monday's. I wanted something easy and healthy and made good use of the seasonal vegetables. The Martha Stewart recipe I chose was Zucchini Lasagna that was published in her Everyday Food magazine. Unlike so many of her recipes this one was fairly easy! Using the no-boil lasagna noodle really help with the ease of this recipe! I had a box on hand and I wanted to use them, so another good reason to choose it. I just don't make regular lasagna much, because it makes so much and my daughter isn't that big on the red sauce.

It turned out good and we really enjoyed it, but of course I made a few...tiny adjustments. She calls for low fat cheese which is fine. I didn't use all the cream cheese because I used regular cream cheese and I used more mozzarella in the layers. I added more garlic, Herbs de Provence, and some red pepper flakes. It was nice it called for an 8x8 dish, a good size for my family. I did add some eggplant that I needed to use up before it went bad.

It is nice and creamy, and I probably should of used all the cream cheese! 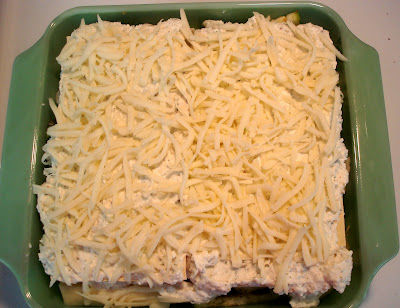 It filled the dish above the top, so I had some food pick I put in the center so the cheese would stick to the foil. 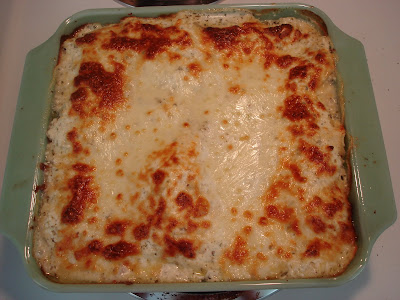 The foil comes off and a final toasting in the oven. I knew it would settle a little when it cooked. 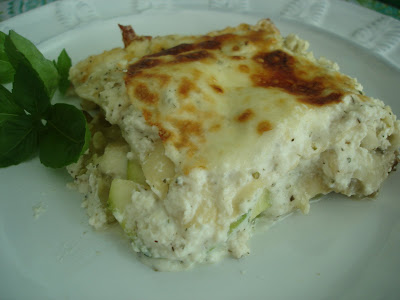 I liked the texture of the zucchini, I sliced it pretty thin, but it didn't come out mushy at all. I also like the different texture that the eggplant gave it. There was less eggplant than zucchini, and that worked out nice. It was so good and creamy. I was worried that there wouldn't be enough sauce, but there was just enough sauce. 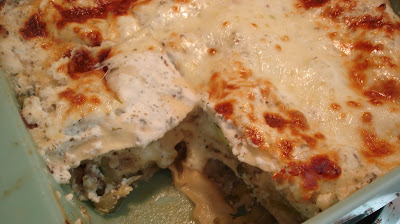 The nice thing about this recipe it works well with any changes that you want to give it, or not. I was thinking maybe some toasted walnuts to give a little crunch, but then regular lasagna doesn't crunch....just a thought! 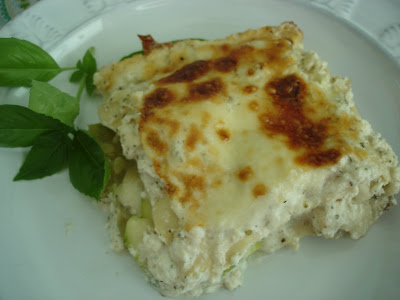 If you would like to see how others did on this recipe check out Brette's blog Martha and Me for a list of those that like to participate in...

Please feel free to join us...you can cook along with us, or do a craft! It's all in fun! You can join the fun check here at Martha and Me !

Posted by tinyskillet at 3:10 PM