Another way to use Chickpea flour ~ Cabbage Fritters 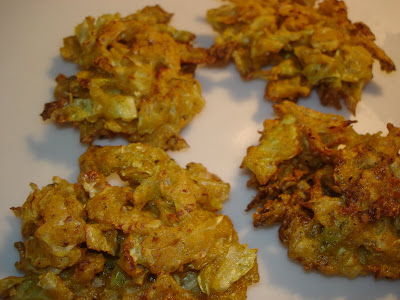 I think Indian households aren't the only ones that should have chickpea flour as a regular staple in their pantry. I have really enjoyed using it. Also known as gram (besan) found in Indian markets, or garbanzo bean flour that can be found in your health or natural food markets and even in some supermarkets. Many use it in gluten - free diets. I am keeping it on hand in my pantry from now on! 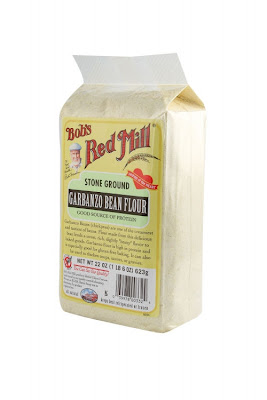 I have been using Bob's Red Mill brand and have found it in many stores near me. I think Walmart carries one that is garbanzo bean and fava bean blend. I haven't tried that one yet.
I found another recipe from Jay's blog Tasty Appetite this time she uses shredded cabbage. I happened to have a cabbage on hand and tried it right away. Cabbage Fritters are easy to make and oh-so-tasty! 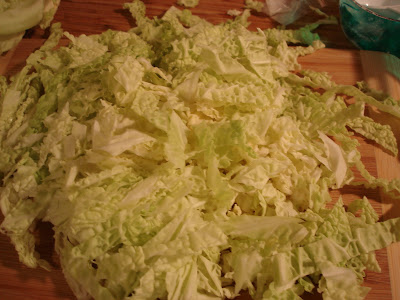 I had some savoy cabbage so I sliced it thin, then cut it crosswise, in a nice loose chop. I made just a little adjustments to the original recipe. In a bowl I mixed:

To that add some water to make a thick batter. Then ... 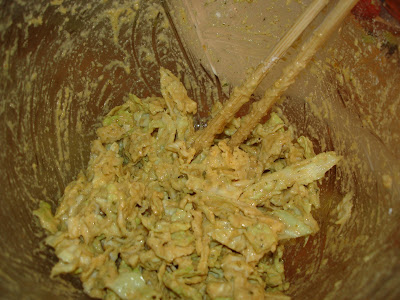 ...add the shredded cabbage about 2 cups, and mix well...


Heat oil in a skillet or frying pan. I made them into little patties and dropped them in the hot oil, I like to pan-fry rather than deep-fry, that is just my preference. Fry the fritters until they turn golden brown.
Drain the excess oil by placing the fritters on paper towels. Sprinkle a little sea salt over them while they are hot if desired. 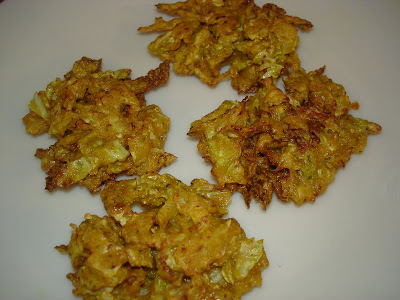 Here is another yummy snack or side that you don't feel so guilty eating. It's a great way to get your kids to eat their cabbage or any veggie, my daughter liked them. So quick and easy and tasty. They went almost as fast as I made them. 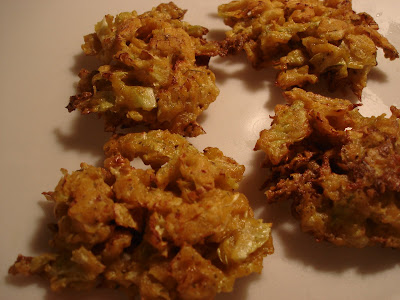 We ate them just as they were like this, but I'm sure you could find many thing to dip them in.

I wanted to see how they would be it I just dropped then into the oil and fried them like this. 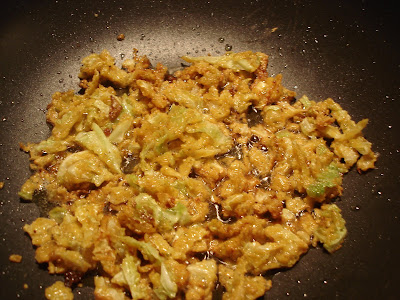 It was good that way too, but I think I prefer the first way in the little fritter patties. 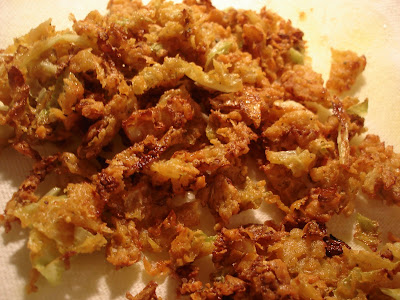 Of course doesn't frying make everything taste good? This is a double goody with the benefits of garbanzo bean flour and cabbage so I think it balances out don't you?

My sister and niece are flying in to night for a week long visit. My parents rent a place out on the key for a month, so they stay with them. I know it only takes 4 minute to drive there from my house. They are right there at the beach. It will be nice for them to get out of the snow for awhile. I hope the weather keeps up like it has been for them, it's been in the 70s F. It's nice having family around.

Posted by tinyskillet at 4:56 PM