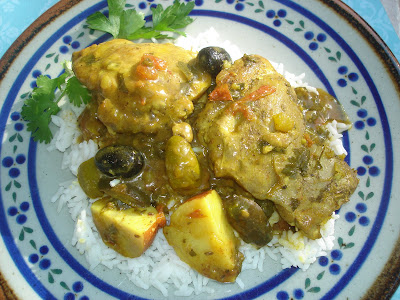 My co-worker gave me this recipe, she has never made it before, but she did taste it when her writing teacher made this and brought it into her class one evening. She thought I'd like it since I am interested in different regional cuisines. She was telling me about the preserved lemons that were used in this dish. I looked for them at the local shops by us that carry Moroccan foods and such. I put the recipe aside probably for a year or so, not really sure. I finally decided this year with my good crop of lemons to make my own preserved lemons...you know since I knew nothing was used on them like fertilizer and pesticides...maybe just lizards walking on them (I cleaned them super good) :)

So it has been over a month since I started the jar of preserved lemons where they have been hanging out on my counter looking all pretty. Every so often truing the jar, moving all the salted juice around the coriander seeds and cinnamon stick, wondering how much you will be able to taste all the flavors they might bring... 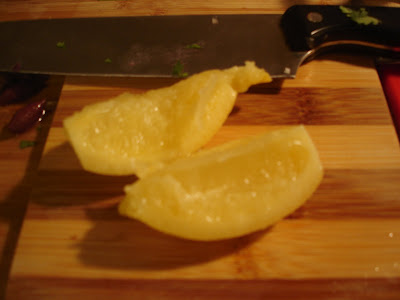 ...the wait is over, actually it wasn't that bad waiting for it...now if it was soaking in a good booze with sugar instead of salt, that's another story :D

When you use the lemons they recommend that you rinse it will and take out the flesh and just use the outer peel (remember these are washed very well before preserving) . Some will say you can use the whole thing and it will give a stronger flavor.

Chicken and Olive Tajine
1/4 cup olive oil
1 1/2 pounds of skinless chicken parts (I used the breast tenders and boneless thighs)
3 cloves garlic, chopped (I used a little more, my preference)
1 onion chopped (I used the sweet Florida onion)
2 tablespoons ground ginger (I used some fresh chopped and and a little ground)
2 tablespoons cumin
2 tablespoons turmeric (I should of used my fresh turmeric too)
1 tablespoon paprika (I had smoked paprika so I used half that and half red chili powder)
1/2 teaspoon sea salt
1 teaspoon freshly ground pepper
1 teaspoon Lebanese spice mix (I used my spice blend because I didn't have any ras el hanout, or you could use a Moroccan blend if you have one or not you can skip it)
2 cups chopped tomatoes
1/2 cup chopped Italian parsley
1 cup chopped cilantro
1 preserve lemon (I used half, my lemons were larger than the ones I've seen)
1 7 1/2 oz jar pitted Greek olives (I used some mixed olives I got at the Middle Eastern store)
4 quartered boiled potatoes (I used little red potatoes) 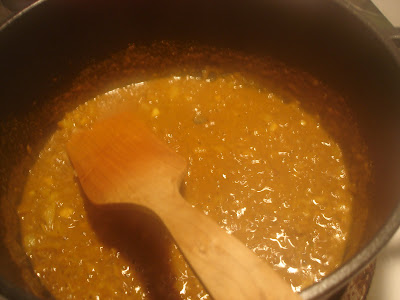 In a large skillet, heat 1 tablespoon of the oil and saute the chicken in two batches until browned on both sides. Set aside. (I used a Dutch oven since I had to set aside the chicken anyway I just placed in on a dish until I needed it back in the pot)

Heat a 6 quart cooking pot, add remaining oil and saute the onion,and garlic until transparent, adding the ginger, cumin, turmeric, paprika, salt, pepper, spices, and 1/2 cup of water and cook for about another 5 minutes or so... 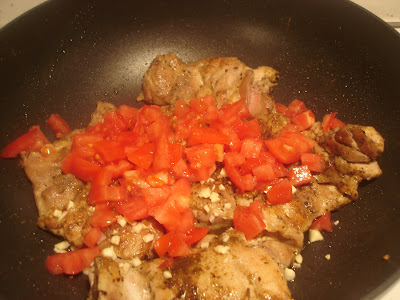 Add the chicken, tomatoes (I added some garlic at this time so it wouldn't burn or turn bitter in the saute) ... 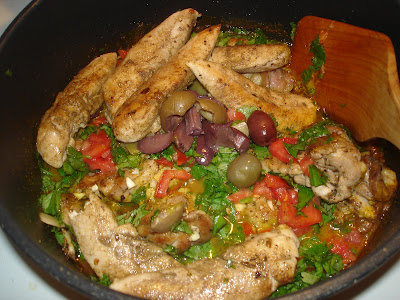 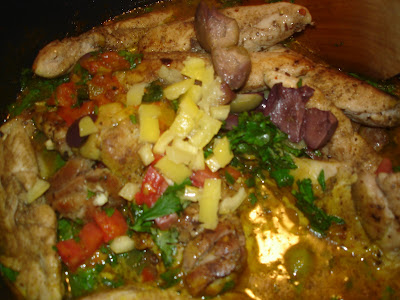 ...and enough water to almost cover the ingredients and bring to a simmer. Cover and simmer for about 20 minutes. Add boiled potatoes and cook another 10 - 15 minutes, or until chicken in done. (I didn't quite boil the potatoes all the way through before I added them because I knew they would be cooking in the pot for another 15 minutes). 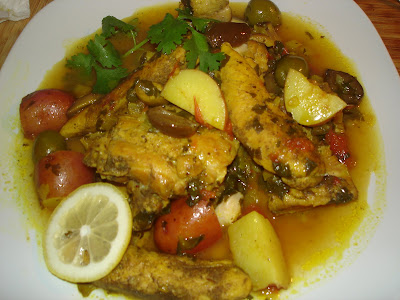 The recipe has you serve it with French bread so you can soak up every last drop of the delicious broth. Lots of broth here, so... 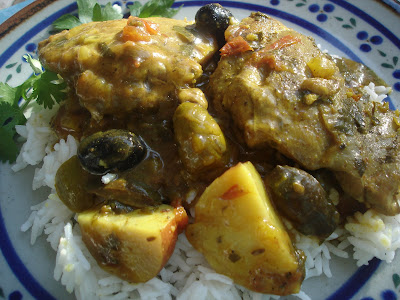 ....I thought another way to soak up the broth...it would be good over rice, or couscous of course!! 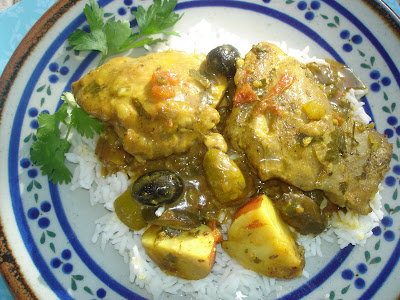 This Moroccan dish is highly spiced and is usually made in a tagine hence the name I imagine,
but since I don't have a tagine I couldn't tell you how or if better using one. It turned out good using the Dutch oven, and it was even better the next day for lunch! 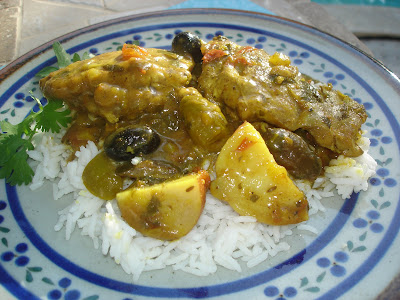 I used my glass lock & lock lunch box that I got for Christmas and it worked great to warm everything up. 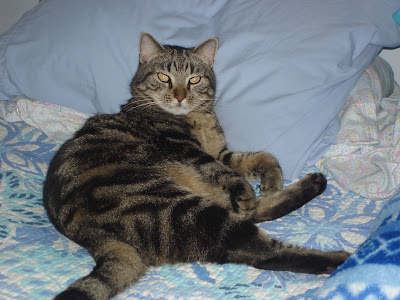 Our neighbor's cat who thinks he lives at our house (we never feed him, just the birds out front by way of the bird feeder) has found a new place for his afternoon nap! My daughter's bed, of course she doesn't mind the company!