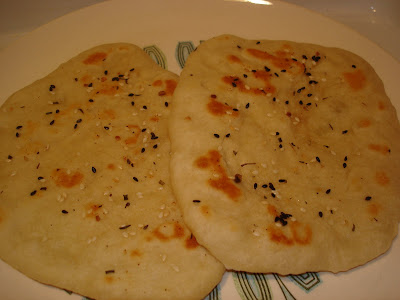 When I was a child growing up in west Michigan we had a neighbor that lived at the end of our street, that would make Syrian bread. Occasionally she would bring us some and I loved it. I never did get her recipe. When I was young I didn't cook much, and that was mostly due to the fact that my mom was such a good cook. When she did let me help it was usually my job to make the salad....and I hated making salads. I had to tear the lettuce so it wouldn't bruise and it seemed no matter how much I tore at it, the big salad bowl never got full.

Then she would let me brown the ground meat for spaghetti bolognaise or chili or something. She asked me to season it...oh now this was interesting to me. I started to sprinkle the usual salt, pepper and garlic powder. That was good, but I wanted to see what a little of this and a pinch of that might do...over the years when I learned a little more about herbs and spices (which I love and have a passion for) she would call me into the kitchen and would ask if I wouldn't mind seasoning whatever it was that she was making for dinner. 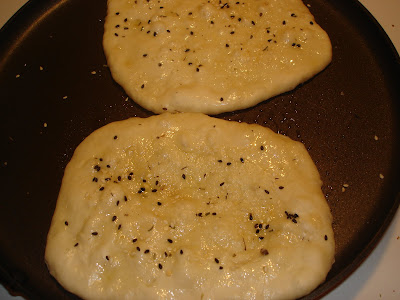 Actually I don't know what that has to do with anything other than that is a bit on how I got started experimenting with different recipes and made them my own. I haven't really thought about Mrs Ansara's Syrian Bread until I ran across this bread on Treat and Trick...and what luck, it was a bread machine recipe!!! Whoo hoo!!

Hit the dough cycle.
Preheat oven to 400 degree F.
When the cycle is complete punch down dough and divide into 8 and make into balls. Roll each ball out into about a 6" circle, (mine ended up being a little more rectangular),
Brush tops with melted butter and bake (probably will only be able to bake a couple at a time) 8 minutes and then flip and brush other side with the butter and bake for another 5 minutes. 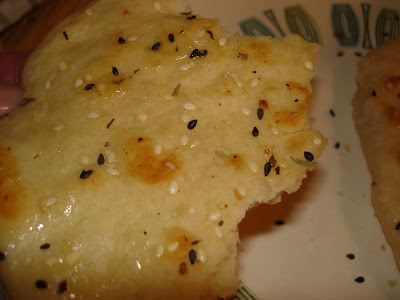 While I baked some I also did what she did and made some on the griddle about five minutes each side. You can tell when they get done with the little golden spots that start to appears. I topped some of them with ...black and white sesame seeds, garlic, and sea salt (I keep this blended and in a jar to use on many things). On a few others I topped with zaatar seasoning (also a blend that I've made), but didn't get a picture of those. I guess they tasted too good hot off the grill to stick around for a photo op! 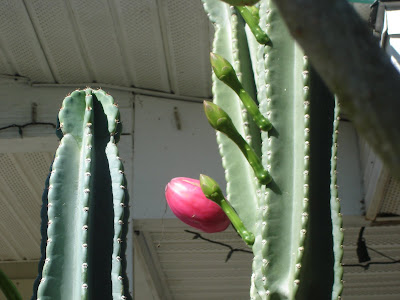 Some more backyard (well actually this is my front yard) photos. I saw some seed pods or tunas on my cactus. I thought this was a Trichocereus pachanoi ( San Pedro) cactus, but it seems it gets confused with T. peruvianus (Peruvian Torch) one or the other is said to contain mescaline even though in small amounts...and since I am not sure. I will stick to my prickly pear cactus and wait for those to fruit! :) 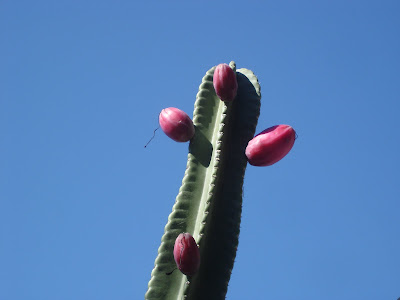 I have heard that they rarely produce this sweet fruit. One split open yesterday and it looks like the white dragon fruit inside. Still it looks pretty cool against the bright blue sky!